Every year in Spain, thousands of galgos are born and bred to hunt. They endure a life of fear and cruelty and when they are no longer useful, they are savagely killed… Hung from trees, thrown into wells, beaten to death or abandoned.

Even though Galgos need our help all year long, World Galgo Day was started so that we can unite and speak with one voice about the plight of these beautiful dogs. February 1 was chosen because it marks the end of hunting season when many Galgos meet a fate worse than the life of cruelty that they have already endured.

The Life of a Galgo

The Things You Should Know

Galgos are mainly used for hunting or coursing hare. During the annual hunting season that runs from October to January, many live in cramped dark sheds when they are not coursing, spending their days confined and neglected. Training techniques are barbaric and include towing Galgos from cars, trucks and motorcycles at high speeds.

Known as Galgueros, hunters dispose of Galgos at the end of hunting season in the most horrific ways imaginable... hung from trees, thrown into wells, starved, beaten to death or abandoned. It is estimated that thousands of Galgos are killed every year.

A favorite among hunters to dispose of unwanted Galgos is called "piano playing". The galgo is tied around the neck and hung in a tree so that the poor dog barely reaches the ground with its hind paws, trying to balance and "dancing" back and forth with the back legs and paws, barely on the ground, to avoid strangulation. Being killed in this way is a slow death and that the dog experiences panic, anxiety, despair and unimaginable pain. The suffocation can take hours and sometimes even days. In the end, when the Galgo can no longer manage to stand on its hind legs, exhausted in the snare, the dog finally suffocates to death.

If merely abandoned, they are purposely crippled so that they cannot physically return to the hunter. Those that survive abandonment languish in state-run shelters where they inevitably die.

The excessive, uncontrolled breeding and mass abandonment of dogs at the end of hunting season leaves a massive population of starving and sick dogs.

Associations in Spain, rescue and rehabilitate as many dogs as possible so that they have a chance at a future and a forever home. The Galgo is a truly precious breed. Although not considered pets by Galgueros, they are wonderful companions and eternally grateful for a second chance.

Display your support and build awareness by using a World Galgo Day Facebook and Twitter profile and cover images.

Download the World Galgo Day poster, print it, pin it up, and spread the word about the atrocities the Galgo endures.

and start a conversation about Galgos 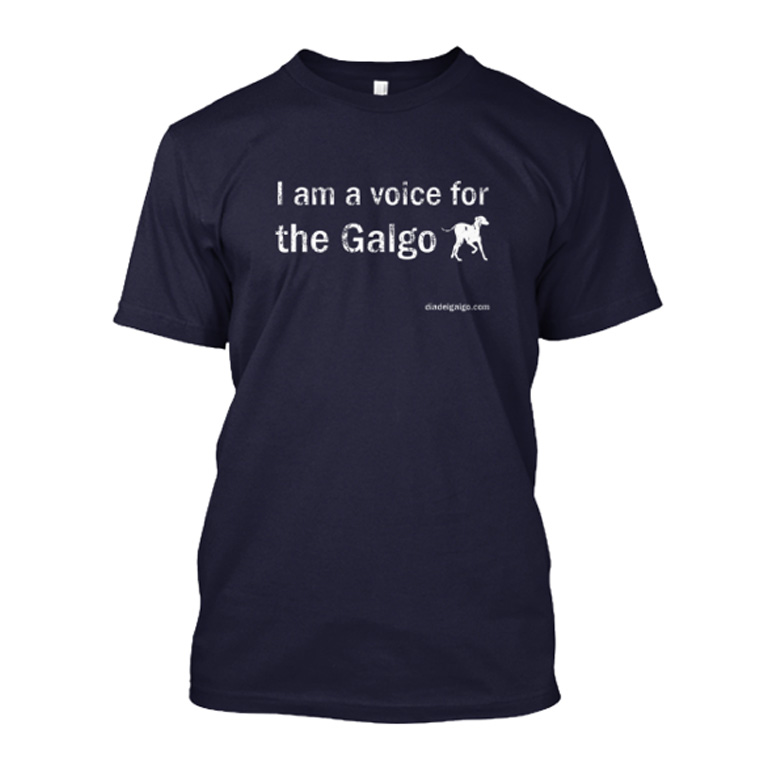 Proceeds from the t-shirts sales will go to one of these supporting organizations: